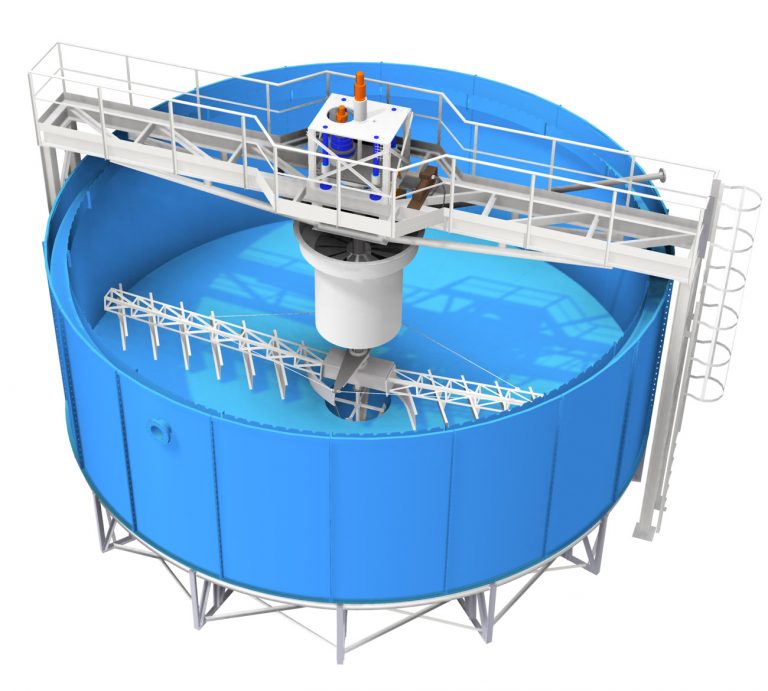 High rate Thickener are used to concentrate as much as possible the solid in the bottom of the Thickener.

The last technology of high rate thickener or thickener plant developed by Cogede allow to optimize the consumption of polyelectrolyte by special feed well design.

The High rate thickener are equipped with a Sedicontrol system that monitors continuously the flocculation and adapt the polyelectrolyte dosing according to the right settling speed. In this way the thickener plant is able to guarantee automatically constant settling performance.

High rate Thickener in mine

The feed well of the Cogede High rate Thickener can be also customised in order to guarantee an optimum flocculation by an auto dilution system or by force dilution system according the specific characteristic of the slurries.

Moreover our High rate thickener have a system that allow us to measure continuously the effort on the rake  and by a system of hydraulic jacks to move up and down the thickener’s Rake in order to have constant concentration thickener output and to avoid any mechanical problem on the mechanism.

The High Rate Thickener or thickener plant are mainly used in the mining application for tailing management and for concentrate thickening and in all that application where it is important to reach an high concentration of solid in the thickener underflow.

Usually in the clarifier thickener Cogede use peripherical drive unit because the concentrated sludge in the bottom of the Thickener is not of very high density and the specific weight of the solid part is not very heavy.

On the clarifier thickener Cogede can install the Sedicontol device in order to monitor the settling process and to optimize the polyelectrolyte consumption.

On the Deep Cone thickener Cogede can install the Sedicontol device in order to monitor the settling process and to optimize the polyelectrolyte consumption.

The Cogede Deep cone thickener can be made in painted carbon steel, in hot dip galvanized Steel, Stainless Steel etc.

The main advantage of the Lamella thickener is that it is possible to treat  a big  volume of dirty water in small footprint compare to the other thickener technologies.